In literature, a caricature is a character who is given a combination of oversimplified and exaggerated characteristics and features. While the type of caricatures that are popular as street art or political cartoons only highlight physical features, caricature examples in literature can often include personality features that are oversimplified or exaggerated. Caricatures can often be used for satirical purposes, or to generalize about a group of people.

The word caricature comes from the Italian word caricare, which means “to charge or load.” While caricatures have been found as early as in cave paintings in Pompeii, they gained more popularity in French and Italian aristocratic circles in the seventeenth and eighteenth centuries. Portraits were painted representing famous people, especially politicians, that were humorous. The definition of caricature thus carries this meaning of being a charged painting.

It is easy to find street artists all around the world who produce caricatures. Political cartoonists in many different cultures also choose to create examples of caricatures to represent or criticize politicians. Here are some caricature examples of famous people: 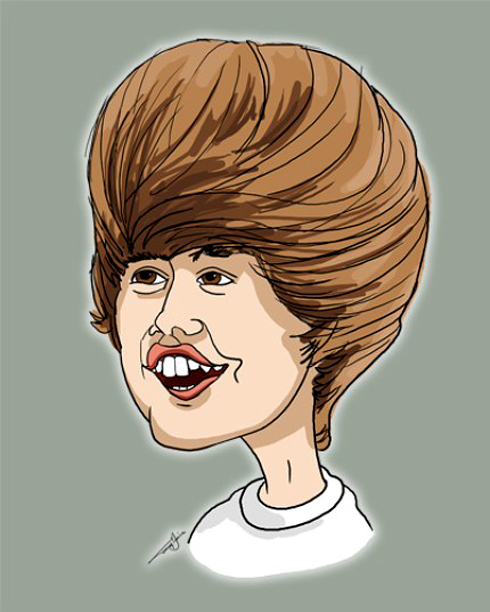 Significance of Caricature in Literature

Authors often choose to use caricature in their works of literature to criticize qualities they see in their own societies. For example, an author might be frustrated with greedy politicians and create a character that is an overt critique on these politicians. The author would do this by including stereotypical characteristics of these greedy politicians in a character and show how foolish they are.

Authors also sometimes create characters who are caricature example unintentionally. This can happen when the offer him or herself has an overly simplistic understanding of certain characters and does not think about the complexities inherent in each human life. When caricature is used as an unintentional device, it is often grating to readers. It is always more satisfactory when an author thinks through all aspects of a character, and sometimes when there are caricatures in place of characters readers feel frustrated by the oversimplifications. For example, when there is a villain in literature who is always evil without any obvious motivations besides being evil readers will feel annoyed by this oversimplification.

Examples of Caricature in Literature

SOLANIO
I never heard a passion so confused,
So strange, outrageous, and so variable,
As the dog Jew did utter in the streets.
“My daughter! O my ducats! O my daughter,
Fled with a Christian! O my Christian ducats!
Justice, the law, my ducats, and my daughter!
A sealèd bag, two sealèd bags of ducats,
Of double ducats, stol’n from me by my daughter!
And jewels—two stones, two rich and precious stones—
Stol’n by my daughter! Justice, find the girl!
She hath the stones upon her, and the ducats.”

(The Merchant of Venice by William Shakespeare)

There are many problematic interpretations of the complex character Shylock from William Shakespeare’s play The Merchant of Venice. Shylock is Jewish and, as was typical in in Renaissance England, was portrayed with red hair and was always scheming for money. The character Solanio reports that after Shylock’s daughter Jessica eloped with a Christian man, Shylock was just as upset about the loss of money as he was of his daughter. Solanio describes Shylock as a sort of caricature of what he might have thought of as a typical Jew. However, Shakespeare creates a much more complex portrayal of Shylock than this passage would hint at.

Cinderella obeyed, but wept, because she too would have liked to go with them to the dance, and begged her step-mother to allow her to do so.
“You go, Cinderella,” said she, “covered in dust and dirt as you are, and would go to the festival. You have no clothes and shoes, and yet would dance.”
As, however, cinderella went on asking, the step-mother said at last, I have emptied a dish of lentils into the ashes for you, if you have picked them out again in two hours, you shall go with us.

(Cinderella by the Brothers Grimm)

The caricature of the step-mother was very popular in fairy tales by the Brothers Grimm. This has been theorized to be the case because inheritance rules were very important at the time, and the role of the step-mother could often ruin children’s chances at inheritance. Thus, step-mothers were often portrayed in as a caricature of completely evil women who only wanted to ruin their step-children’s lives, such as in the case of Cinderella.

Twelve voices were shouting in anger, and they were all alike. No question, now, what had happened to the faces of the pigs. The creatures outside looked from pig to man, and from man to pig, and from pig to man again; but already it was impossible to say which was which.

The above quote from George Orwell’s Animal Farm comprises the last few lines of the novel. Orwell wrote Animal Farm to criticize the Russian political leaders who promised one thing—communism and equality for all—and delivered a very different thing—a very segregated society in which there was too much work and not enough food. The final few lines show how Orwell used caricature examples brilliantly to equate humans and pigs. In the logic of the novel, the humans are the bad guys and the pigs becoming like them shows their corruption. Yet, in the way Orwell writes it the caricature clearly shows how the real Russian leaders were themselves greedy pigs.

The Dupont campus … The moon had turned the university’s buildings into a vast chiaroscuro of dark shapes brought out in all their sumptuousness by a wash of pale white gold. The towers, the turrets, the spires, the heavy slate roofs-all of it ineffably beautiful and ineffably grand. Walls thick as a castle’s! It was a stronghold. He, Hoyt, was one of a charmed circle, that happy few who could enter the stronghold at will … and feel its invincibility in their bones. Not only that, he was in the innermost ring of that charmed circle, namely Saint Ray, the fraternity of those who have been chosen to hold dominion over … well, over everybody.

(I am Charlotte Simmons by Tom Wolfe)

Tom Wolfe’s novel I am Charlotte Simmons is an example of caricature in which Wolfe doesn’t understand the complexity of his own characters. He creates an over-sheltered and naive girl as the , and surrounds here with caricatures of other college students such as “the jock,” “the nerd,” and so on. In the above excerpt, Wolf is trying to describe the of an Ivy League college in the United States, and uses a caricature instead of a realistic character as the typical “frat boy.” By only writing in over-used tropes and creating cliched scenarios, Wolfe has used caricature in the worst possible way.